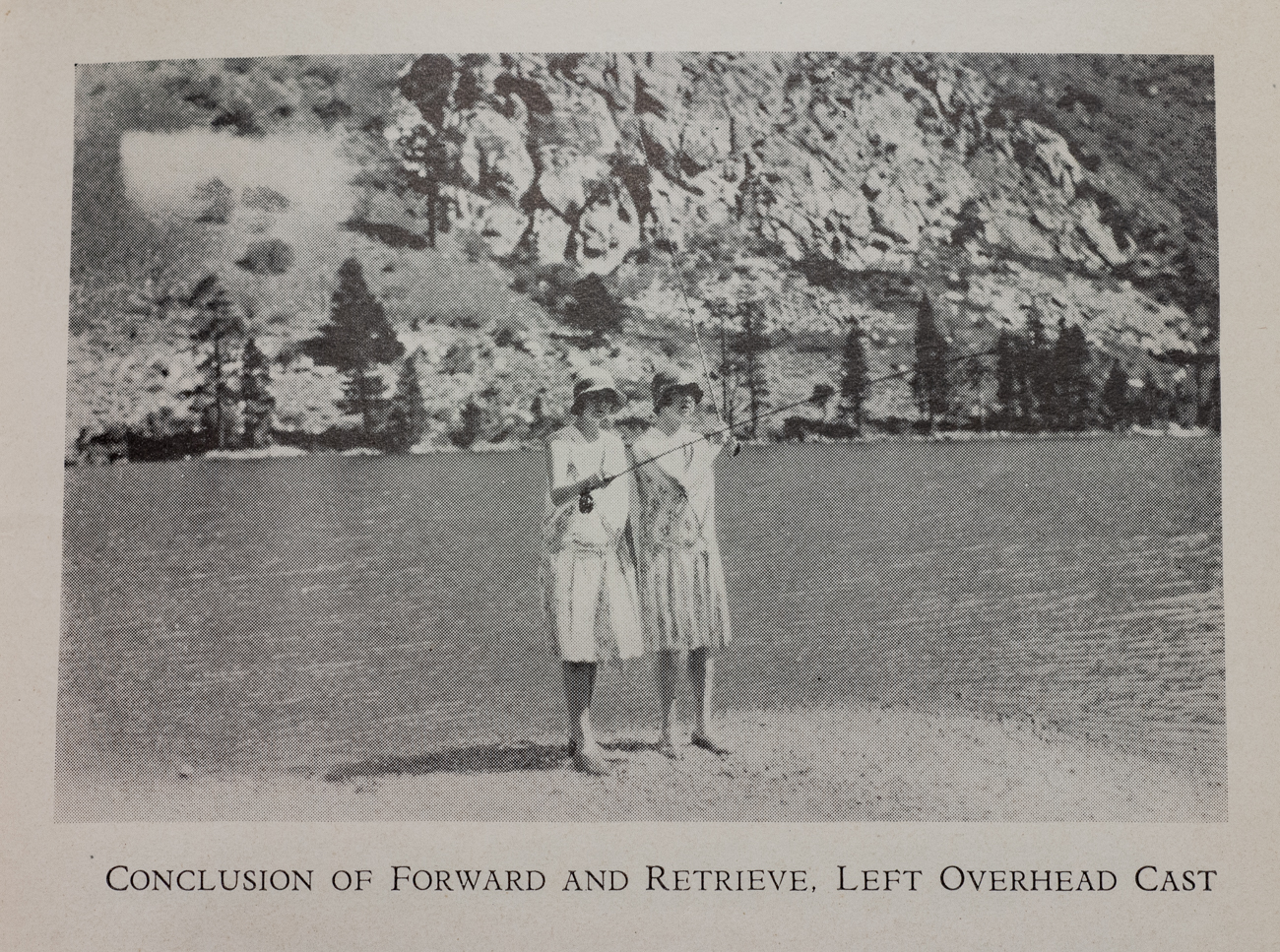 The photo shown above is from an obscure book titled Outwitting Trout With a Fly, Letters of a Western Angler, written by Bertram Lackey and published in 1929. I’m rather struck by the caster’s attire. Seems more fitting for a night on the town than fly casting instruction. Then again, commentary on the sartorial choices of any female, of any era, lies miles outside my ken. I’ll simply note that styles have changed over the intervening years. On the other hand, I feel much more qualified to discuss the casting mechanics being demonstrated. So let’s have a look at the technique depicted here, and see if it remains “in style”, 92 years on.

Let’s start with the “retrieve” (backcast), on the right side of the photo. The elbow position is higher here than in its concluding position; a fundamentally sound move largely accomplished by utilizing the muscles of the shoulder. Excellent work, ladies. Raising and lowering the elbow during the casting stroke prevents most tailing loops and also sets the line trajectory properly—high in the back, low in the front. It’s a movement we should all strive to incorporate, in every variety of cast. Now, check out the angle between forearm and upper arm—slightly less than 90 degrees, a somewhat closed position relative to the conclusion (and I assume start) of the cast. This isn’t a serious issue. It merely means that some of the effort that could be—forgive me here—shouldered by the shoulder has been transferred to the biceps and forearm muscles. Over a long period of steady casting, that can be fatiguing.

Still looking at the “retrieve”, note the relation of the reel seat to the caster’s forearm. Assuming the starting position of the cast was the same as the conclusion, the roughly 45 degree angle between the two tells us immediately that the caster has employed her wrist to help accelerate the rod. Great work. Our wrists should be used on every stroke we make, without fail. But hang on just a sec. Her wrist movement invites further critical analysis (because, as serious casting students, critical is all we know). Looking closer reveals an imbalance between her wrist and upper arm movements. By way of explanation, let’s assume she’s making a short cast, say, 30 feet or less. The 45 degrees or so of wrist flex she’s employing is excessive for such short distances; it’s tiring to the wrist and typically leads to wide, sloppy loops. This can be fixed by relying more on the upper arm and shoulder to accelerate the rod and less on the wrist. That’s accomplished by raising the elbow higher.

Assume now that the photo is meant to represent a long cast. Because a long cast requires more acceleration of the rod, her 45 degrees of wrist flex is no longer a problem. But her elbow is. It’s still too low. Once again, she’s relying too much on her wrist to accelerate the rod and not enough on her upper arm and shoulder. Can she still be successful this way? Of course. But an over-reliance on the wrist makes casting a tiring affair and, more ominously, can lead to tennis elbow—something I’ve seen plenty of flyfishers suffer through. Good mechanics dictate striking a balance, where the work of accelerating the rod is spread proportionally among all the muscles of the arm.

On to the conclusion of the cast. First thing to note is that the reel seat and caster’s forearm have now come parallel to each other. This is an ideal finishing position. Getting there requires using the wrist, which as noted above is something we want to incorporate on every stroke, in the appropriate degree. Well done, ladies. Now look at the angle between upper arm and forearm—roughly 90 degrees. This is a slight increase from the backcast position. As an instructor, I teach that maintaining an approximately 90 degree angle throughout the casting stroke is the most efficient way to cast (excepting extreme distance). I find it’s also the easiest arm position for students to comprehend and incorporate. Other instructors teach that the angle between forearm and upper arm should close and open through the stroke, but typically ending in this 90 degree position. Either way, the picture illustrates a pretty sound conclusion to the cast.

Outwitting Trout With a Fly is not a book of casting instruction. It was written as a series of letters to a beginning angler. So it’s probably safe to say that our analysis here goes slightly beyond what Lackey intended. Then again, maybe not. Taking the trouble to stage a picture like this one (and there are a number of others in the book), shows that he’s pretty serious about fly casting. He also participated in casting tournaments, another testament to a genuine interest in this aspect of the sport. So kudos to Mr. Lackey. The mechanics his models demonstrate were “in style” back in the day, and remain that way today. So go ahead and use these ladies as an example. Except, perhaps, for their streamside attire.