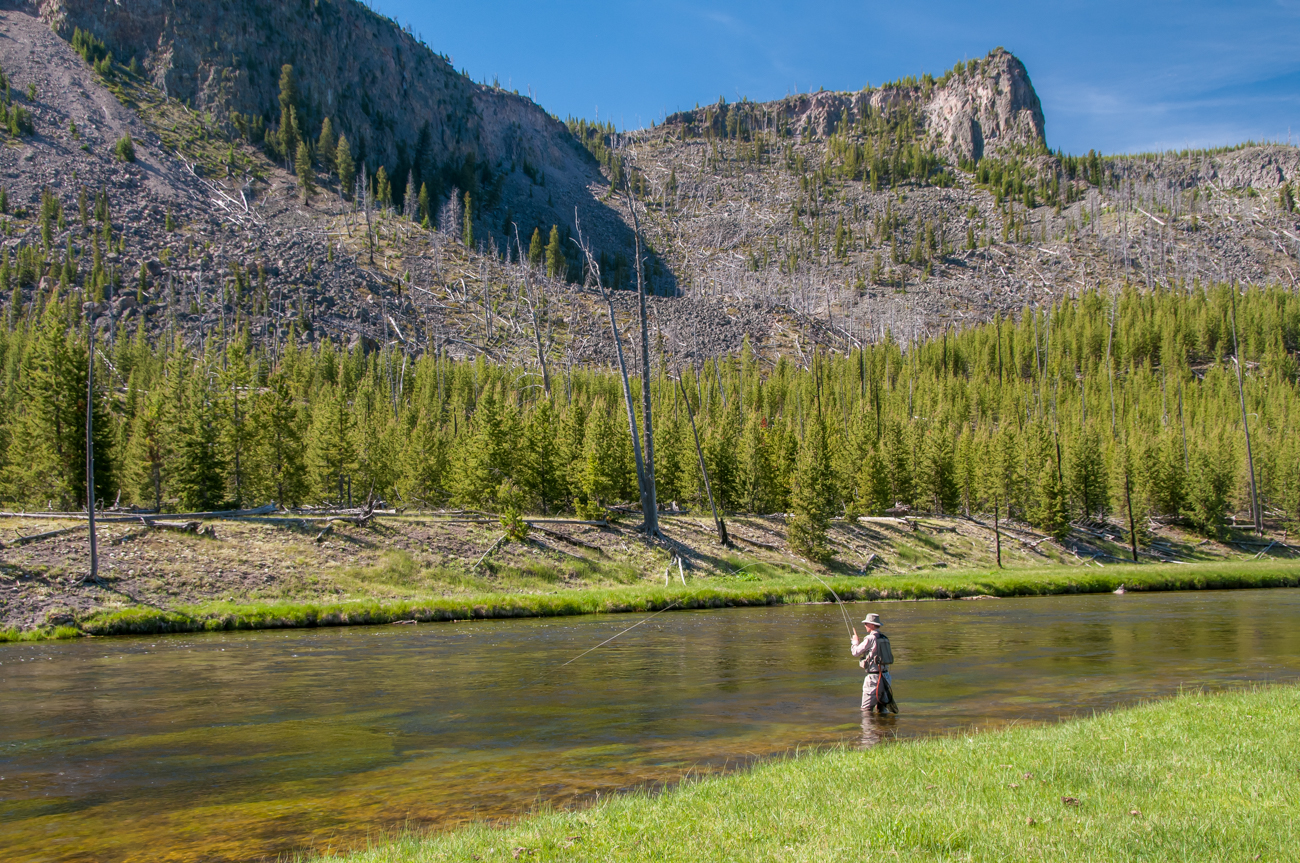 A few seasons ago, on my way to fish the Firehole River on a fine June day, I got in a bit of a traffic jam while driving along the Madison. Actually, it was a hell of a traffic jam; bumper to bumper in my lane, no cars moving in either direction. Buffalo standing in the road somewhere up ahead, I assumed. Not fancying my chances of getting to the Firehole in a timely manner, pulling over and checking the Madison seemed like the only sensible thing to do. It was near to 9:00 a.m., and the sun felt warm as I walked down to the river. Pale Morning Dun mayflies were emerging. Scattered rises peppered the surface. Heeding the old guide adage of never, ever leaving rising fish, I quickly wadered up, strung my rod, and tied on a Sparkle Dun.

Cruising up the bank, I stopped when I spied a couple steady risers. After working my way into casting position, both fish, in turn, took my fly without hesitation. I fought and landed two fine brown trout, while noting the lies of several more. The hatch turned heavier now and more fish began rising. In the next fifteen minutes, I covered half a dozen fish and caught…nothing. Hmm. Something was amiss, but what? (I was comfortable enough with my presentation to rule that out as a factor.)

I quit casting and watched. Plenty of PMD’s were floating down. But now I saw that the rises were of two characters. Roughly half were quiet dimples, barely disturbing the surface. The others were explosion rises. Over the years I’ve seen trout rise to PMD’s in just about every conceivable way, but to see two such disparate kinds occurring simultaneously was strange. I watched more closely. The duns bobbing along on the surface—none were taken. This suggested that the food of choice might be nymphs in the film. I promptly tied on a #16 floating nymph and caught a few more trout. But things still didn’t feel right. Yes, I was catching a few fish, but many of the risers I cast to showed no interest at all, despite rising steadily.

It finally dawned on me that the only fish I was catching were those rising quietly. It was the explosion risers I couldn’t touch. I pondered whether those fish were truly nymphing, feeding on an entirely different insect, or whether they might even be whitefish. I kept looking. In some rises I spied glimpses of yellow; in others, spotted fins and tails. Clearly, these weren’t whitefish. Further study of the water revealed a good number of caddis shucks mixed in with the drifting Pale Morning Duns. Could emerging caddis explain the explosive riseforms?

I tied on an Iris caddis in an appropriate size and delivered it over a splashy rise. It was taken at once—a 12″ rainbow. I offered the caddis to other fish rising in the same manner, catching enough to convince myself that caddis were indeed the answer. But would my caddis pattern fool the quiet risers? Presenting it to a number of such fish and eliciting no response whatsoever, I had my answer. Back on went the floating nymph, and I had a few more quiet risers take confidently.

After both hatches subsided and I had time to reflect, I couldn’t recall having ever seen an instance when fish rising in such a short stretch of river split their food preferences 50/50. I haven’t seen it since. Just another example, I guess, of the one-off events nature occasionally throws our way, checking to see if our decoding skills are up to speed.

“On The Other Side Of Noisy”

How to Improve As An Angler